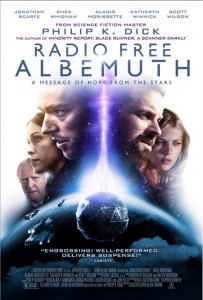 “Pic operates successfully as a study of enlightenment and a straight-ahead conspiracy thriller.”

“A terrific score is the jewel in a first-class tech package.”

“Radio Free Albemuth is a terrific movie, a personal project and a labour of love, the type of quirky indie movie they used to make in the 1990s.”

“I love the movie adaptation of RADIO FREE ALBEMUTH. I want everyone to see it.”

“In our view, the best adaptation of PKD’s work to screen by far!”

‘This year we were delighted to see the final version of Radio Free Albemuth and added a new award to the festival in recognition of the screenplay, it is the truest version of Philip k. Dick’s written word’. – Louis Savy, Director, Sci-Fi London Film Festival

“Five stars — You don’t have to be a fan of Philip K. Dick or science fiction to enjoy this film.

“Radio Free Albemuth should be mandatory viewing for anyone who is interested in vital, independent cinema.

“If you get the chance to see it, don’t miss it”

“Shea Whigam is a revelation as Philip K Dick!”

“This was Philip K Dick’s genius – to correlate and intertwine the political and the spiritual, the most outrageous and the most mundane. And it is the triumph of director and writer John Alan Simon that so much of this genius shines through – more so, I think, than in any previous adaptation of Dick’s work. Whereas previous films mined a core idea by PKD but jettisoned everything else that makes his work so fascinating and important.”

“Among Dick adaptations, two films stand out from the rest as being exemplary evocations of Philip K. Dick’s version of life, the universe and everything: Richard Linklater’s 2006 adaptation of the novel A Scanner Darklyand John Alan Simon’s adaptation of Radio Free Albemuth (2010). And if I was to choose between the two as to which was the more powerful, the most quintessential in bringing Dick’s worldview to the big screen, then I would say without hesitation that it is Simon’s Radio Free Albemuth.”

“John Alan Simon has crafted a film that reveals and revels in the wild flights of imagination and everyday madness that fueled Dick’s brilliance.”

“Deserves a big audience – it is the most accessible adaptation of a PKD novel yet produced.”

‘This film has soul!”

“Shea Whigham as Philip K. Dick was a casting coup. He nails the man’s deadpan humor.”

“A perfect adaptation of Radio Free Albemuth. Absolutely spot on.”

“A truly wonderful piece of acting by Shea Whigham”

“A gift for the legacy of PKD!” 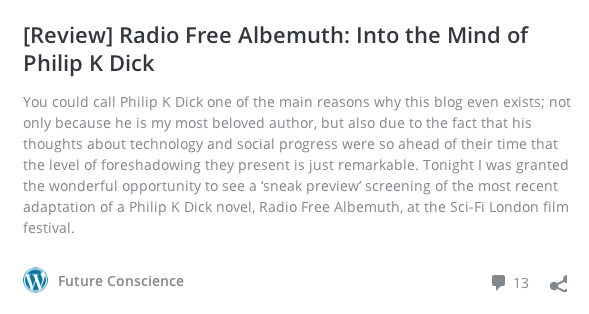